Gary Dolman
Ripon, North Yorkshire, United Kingdom
Gary Dolman was born in the industrial north east of England in the 1960s, but grew up in Harrogate in Yorkshire, where he now lives with his wife, three children and dogs. His writing reflects his fascination by the dark places of the human mind.

This is a re-blog of a guest piece I first wrote for Susie Douglas' excellent blog at www.bordersancestry.co.uk Do take opportunity to have a look, especially if you are of Scottish border blood.

When I was a very young boy growing up on South Tyneside in the 1960s, I have a distinct recollection of being able to look out of my bedroom window, over the lights of Gateshead and the Team Valley to the rising hills in the west. I can also recall my father pointing out of my window many, many times and telling me that ‘over that hill’ lay Camelot. Back then of course, it was firmly accepted that if King Arthur had existed at all, he would most certainly have been a Welsh king; associated with the South West of the country, to Cornwall perhaps or to Hampshire or Gwent.

It was over forty years later, when my father was in the late stages of Alzheimer’s Disease and I was grasping for something to stimulate conversation with him that I happened to mention it back to him. He grinned and said, ‘aye,’ and it would seem now that he might well have been right.

There is a legend, which has persisted for centuries, centred on that part of Hadrian’s Wall country called Sewingshields. Here, where the Great Whin Sill drops away steeply into spectacular, north-facing cliffs is an area known as the Fogy Moss.

The legend runs something like this:
Good King Arthur and his queen Lady Guinevere together with several of the Knights of the Round Table lie in an enchanted sleep in a vast underground vault somewhere near to the site of Sewingshields Castle. They are destined to slumber there until, ‘The End of Days,’ which is a time when there will be a great need for them and the British nation will call upon them to rise again. Then will they be awoken. They sleep with a knight’s garter, a sword and a bugle-horn. To break the enchantment, one need only to draw the sword, cut the garter and sound a note on the bugle.

It is said that one day, many years ago, a shepherd sat knitting as he tended his flock on the common land close by Sewingshields. By chance, his ball of wool rolled away from him and fell down into a deep cleft in the rocks. Clambering down in order to search for it, he discovered a hidden cavern. The floor was thick with toads and newts and suchlike creatures and there were bats flickering around in the air, so he made sure he was quick to retrieve his wool and be gone. But then, just as he was about to climb back out, he noticed the light of a bright blue, magical fire flickering far away in the depths of the cave. Summoning all his courage, he followed it and eventually came across a great, cavernous vault where King Arthur and Lady Guinevere, together with their knights and hounds lay, just as the prophesy had said, in a deep, enchanted sleep. Sure enough; with them were the sword, the garter, and the bugle-horn.

Remembering the legend, the shepherd drew the sword and used it to cut the garter. As he did so, Arthur, Guinevere and the knights all began to stir and awaken and the poor, simple shepherd took fright. He thrust the sword back into its scabbard and fled the vault without blowing the horn which would have woken them all fully. Guinevere and the knights immediately fell back into their slumbers and only Arthur remained awake.

Guessing what had happened King Arthur bellowed these words after the shepherd:

‘Oh, woe betide that evil day,
On which this witless wight was born.
Who drew the sword, the garter cut,
But never blew the bugle-horn.’

Recovering his wits, the shepherd searched again for the vault but alas, it was in vain; the entrance was nowhere to be found.

There was indeed a real Sewingshields Castle. It was built on an island rising out of the boggy lands of the Fogy Moss and owned by one Sir Robert Ogle in the early 15th Century. However it was probably no more than a single tower, defended by a ditch to the west and certainly not the ‘many-towered Camelot’ of Romantic legend. In the 1541 View of the Castles, Towers, Barmekyns, and Fortresses of the Frontier of the East and Middle Marches, Sewingshields (Sewyngeshealles) Castle was noted as ‘an old towre of thinherytaunce of John Heron of Chypchase esquier in great decaye in the rooffe & flores & lyeth waste & unplenyshed.’ By 1847, it had been reduced by decay and pilferage of the stone to a ruin of 1.5 metres or so in height and by the end of the 19th Century all traces of it had gone barring the by-then rather ploughed-out ditch, stagnant fishponds and a smattering of rubble.

‘No towers are seen,
On the wild heath, but those that Fancy builds.
And save a fosse that tracks the moor with green,
Is naught remains to tell of what may there have been.’

Harold the Dauntless, Sir Walter Scott
-on the Castle of the Seven Shields (Sewingshields).

Another example of local Arthurian folklore tells how Cummin (Comyn, Cumin), a great chieftain of the ‘Old North’ came to Sewingshields Castle in order to visit King Arthur. When he departed to go back to his own country, he took with him a gold cup which Arthur, as a token of friendship, had given to him. However, a number of Arthur’s sons (or retainers depending on which version of the tale you read) coveted the cup for themselves. They duly followed Cummin, caught up with his entourage and put him to death at a place called Haughton Common. King Arthur, on hearing of the crime and the grave affront to his hospitality, caused a cross to be erected at the place as a penance and a memorial. That memorial is called Cumming's Cross to this day.

Some way to the east of the site of Sewingshields Castle is the Broomlee Lough. This is one of a number of small lakes which populate the area and one very much steeped in legend and folklore. 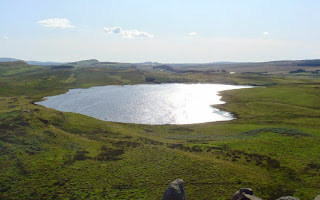 By local tradition, this is the very lake where Arthur received the sword Excalibur from the ‘Lady of the Lake,’ (or, as the Monty Python team would have it, the ‘Watery Tart’), and where it was hurled back over the waters by the knight Sir Bedivere of the Sinews. Certainly anyone who has ever down looked over Broomlee Lough from the high ridge of the Whin Sill won’t help but to feel the magic of the place.

There is, again by local tradition, a vast treasure hidden beneath the waters of the Broomlee Lough. The story goes that long ago, the then lord of Sewingshields Castle was compelled to flee the country for fear of his life. Being unable to carry away with him his great hoard of gold, he resolved to sink it into the deepest part of the lough. Once he had done so, he wove an enchantment over the treasure that it should never be recovered except by the use of ‘Twa twin yauds, twa twin oxen, twa twin lads, and a chain forged by a smith of kind’. (In other words, two twin horses, two twin oxen, two twin lads and a chain forged by a seventh-generation blacksmith – seven souls in total). Finding the location of the treasure is supposedly quite easy for it is said that the surface of the lough where the gold was sunk is disturbed by neither wind nor gale. The tricky part lies in finding the yauds, oxen, lads, and chain necessary to satisfy the enchantment.

North of Sewingshields lie two great outcrops of sandstone. These are called the King’s and the Queen’s crags, the king here being Arthur and the queen Guinevere. The origin of the names is this:

King Arthur, being seated on one of the rocks was talking with his queen who herself was engaged in dressing her, 'back hair’. Something the queen happened to say offended Arthur. He seized a rock which lay near him, and heaved it at her – a distance of about a quarter of a mile. The queen, with great skill and no little strength herself caught it upon her comb and deflected the blow. The rock fell between them where it lies to this very day. As proof of the tale, one may see the marks of the comb still upon it. The stone probably weighs around twenty tons.

Finally, near the farm-house of Sewingshields, several whinstone columns rise up rather curiously in front of the high cliffs. One of these in particular is called by some, King Arthur’s, (and by others King Ethel's) Chair. It was apparently ‘a single, many-sided shaft, about ten feet high, and had a natural seat on its top, like a chair with a back.’ However it, ‘was most wantonly overturned a few years since by a mischievous lad, well known in the neighbourhood, but unworthy of punishment by the mention of his name. Vulgar malignity loves to torment the orderly and ingenuous by destroying works, which time has sanctified and rendered objects of their veneration.’ (Hodgson’s Northd Part III Vol II.)

Although I have focussed here on the legend and lore associated with the country around Sewingshields Castle, (since this is where I set my novel Red Dragon-White Dragon,) rather similar folklore occurs widely across Northumberland, Cumbria and the Borders Region and indeed throughout the north. In particular the legends associated with the Eildon Hills near Melrose are very much akin to those of the hidden vault at Sewingshields. In fact such is the power and romance of Arthurian legend that association has been claimed by a very large number of places right throughout Britain.

Increasingly however, scholarly opinion seems to be that Arthur was a real, historical figure of the early medieval period and that he held power across several fortified sites in the North of England and the Borders. (A court known specifically as ‘Camelot’ was not actually mentioned until the late 12th Century when it appeared in the Chrétien de Troyes' poem Lancelot, the Knight of the Cart.)

As to the veracity of Arthurian Legend itself, no less a person than Sir Winston Churchill once said: “It is all true, or it ought to be; and more and better besides.”

As to the question of whether or not King Arthur once commanded the moorlands of Sewingshields, I know of one person at least, now sadly passed away, who would have said, ‘aye,’ to that.